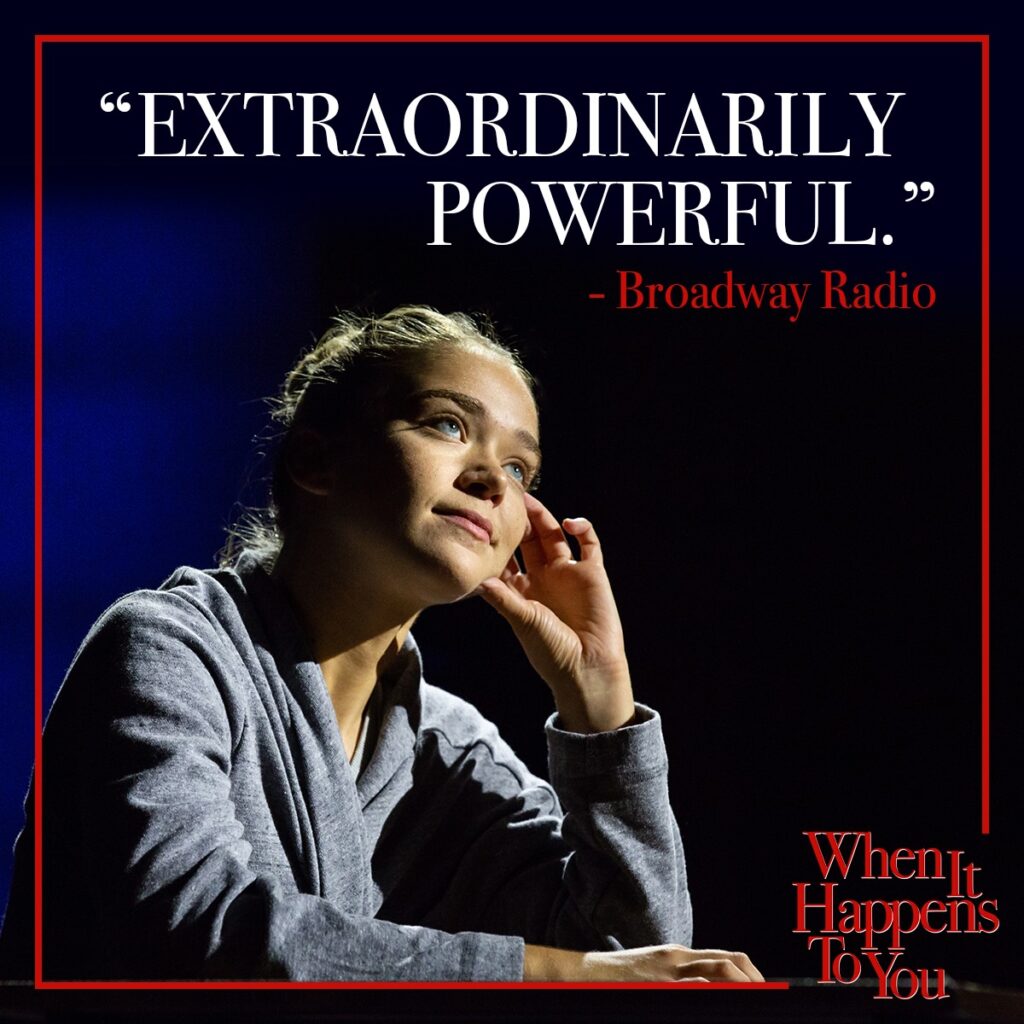 Q&A FEATURE: “BWW Interview: Tawni O’ Dell On Sharing Her Family’s Story & Helping Others with Theatrical Memoir, WHEN IT HAPPENS TO YOU”

BUST MAGAZINE, 10/18/19
REVIEW BY JOLINE FAUJOUR: “‘When It Happens To You’ is a powerful play of love and humor through tragedy”

“‘When It Happens To You’ is a powerful play of love and humor through tragedy. …O’Dell brilliantly narrates, telling the audience how she had to learn to survive. With Kelly Swint and Connor Lawrence, O’Dell turns the tragedy of recovering from the pain into a powerful performance. ‘When It Happens To You’ is a powerful performance about how the repercussions of violence outlive an incident. O’Dell makes clear how she, as a parent, deals with them. And how, even where there’s tragedy, there is still space for love and humor.” [Full Review]

“I found it difficult to take my eyes off of Tawni O’Dell.  O’Dell opened her heart up, tearing it open before a group of strangers with no shame. It was shocking. It was brutal. It made my eyes tear up. And though it was not a new story, it was a story not told often enough. …Sensitively directed by Lynne Taylor-Corbett, ‘When It Happens to You’ is not like any other play going on right now. It is at once a memoir, a saga, and a snapshot into the moments that follow after a loved one experiences a sexual assault. …‘When It Happens to You’ accomplishes catharsis with its simplicity, its straight-forwardness, its significance. I recommend it to anyone who can handle the truth about a truly awful and pertinent subject.” [Full Review]

BROADWAYWORLD, 10/17/19
REVIEW BY CARISSA CHESANEK: “BWW Review: WHEN IT HAPPENS TO YOU Debuts at The Sheen Center”

“When It Happens to You’ is an emotionally-charged, heartbreaking play that everyone should see. Awarded with a standing ovation for good reason, it is about redemption, a mother’s love, courage and strength.” [Full Review]

NEW YORK POST, 10/17/19
PAGE SIX ITEM: “ Sightings – Michael Bolton at the opening night of Tawni O’Dell’s off-Broadway show, ‘When It Happens to You…’”

BROADWAY WORLD, 10/14/19
ARTICLE BY BWW NEWS DESK: “Photo Flash: ‘WHEN IT HAPPENS TO YOU’ Opens At The Sheen Center”

PLAYBILL, 10/10/19
BY NATHAN SKETHWAY: “See New Production Photos From ‘When It Happens to You’ Off-Broadway”

“Based on her personal experience and starring O’Dell, the play follows a mother’s struggle to help restore her family after her daughter is the victim of a brutal attack.” [Full Article]

PLAYBILL, 10/2/19
ARTICLE BY OLIVIA CLEMENT: “‘When It Happens To You’ Begins Off-Broadway October 4″

PLAYBILL, 8/8/19
ARTICLE BY RYAN MCPHEE: “Tawni O’Dell to Bring ‘Theatrical Memoir’ ‘When It Happens to You’ Off-Broadway”

“The play explores a mother’s reaction after her daughter becomes the victim of a sexual assault.” [Full Article]